1. CHRISTIANS: Belief in God the Father, God the Son and God the Spirit, three persons in one  God (doctrine of the Trinity).
NAZARENE MESSIANIC JUDAISM:   We have the father, YHWH, as the only Elohim and the center of worship (Dt 6:4-9). We do not believe in the Trinity.

2. CHRISTIANS: They seemed sure not be under the law but under the grace. The New Testament is the Authority‘s conduct and life as the New Covenant. The salvation is by grace through faith alone.
NAZARENE MESSIANIC JUDAISM: We believe that we are under grace, making it easy to understand and apply the law of Elohim in the Tanack and salvation is by grace through faith in Yeshua. We recognize that Orthodox Jews are judged by the law of Elohim unless, at the end of times, they come into the light of Yeshua.

3.CHRISTIANS: They believe in Jesus and his deity.
NAZARENE MESSIANIC JUDAISM: Yeshua is the Messiah of Israel promised in the Tanack, descendant of David, through his father biological Yosef. The divine nature is, because it comes from the father, He was in front of the Father and saw Him, resurrected and in He lives all the fullness of deity (Colossians 2:9). We believe that Yeshua has a special divinity to be high priest and author through YHWH’s eternal salvation for which beliefs in the Hebrews 5:9-10 reads “ and having been perfected, became the author of eternal salvation to all who obey him and was declared by Elohim high priest after the order of Melchizedek“. 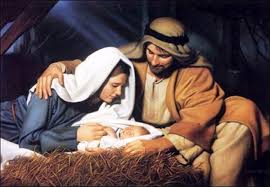 4.CHRISTIANS: They believe the virgin birth.
NAZARENE MESSIANIC JUDAISM: Yeshua was descendant of the House of David by his father Yosef. (There was no virgin birth) See Luke 2:3-6

5.CHRISTIANS: They believe in Sunday as the day of the Lord, the day in that Jesus resurrected from the dead.
NAZARENE MESSIANIC JUDAISM:  We remember Exodus 20:8 “Remember the day Sabbath to keep Holy it.” Exodus 20:9-11.  “Six days you labor, and shall do all your work, but the seventh day is a Sabbath of YHWH your Elohim. You do not do any work – you, nor your son, nor your daughter, nor your male servant, nor your female servant, nor your cattle, nor your stranger who is within your gates. Therefore YHWH (יהוה) blessed the Sabbath day and set it apart”.

6.CHRISTIANS: All Jewish festivals were surpassed by the sacrifice of Jesus Christ. The Christian Church is not obliged to keep Jewish holidays which passed along with Acts of the Apostles.
NAZARENE MESSIANIC JUDAISM:  We celebrate all the Leviticus 23 festivities, especially the three large annual Festivities of Elohim: Pesaj, Shavuot, and Sukkot, and the weekly gathering of Shabbat / Saturday, all scriptural, not “for the Jewish“,  but for all “followers of YHWH“.

8.CHRISTIANS: The Christian Church recognizes baptism and the supper of the Lord as ordinances left by Jesus Christ to his Church.
NAZARENE MESSIANIC JUDAISM:  We do not believe in any “Holy supper” out of Passover, and this is only once a year. We practice every Shabbat Kiddush take: take unleavened bread and wine kosher. To the  purpose of “baptism”, in Judaism, the mikveh, the bath ritual exists from  4,000 years ago and physically,  there are no difference between it and the immersion in water instituted by the Rabbi Yeshua except by a single difference: the immersion in water is made a single time for salvation proof, for death of our ego and to have the life of Yeshua Ha Mashiach in us. The mikveh is done periodically. 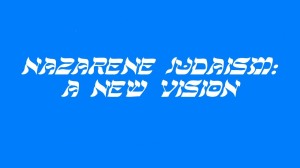 9.CHRISTIANS: Christianity believes that what the Nazarene Judaism is doing is “Judaizing” and “go back to Judaism“.

NAZARENE MESSIANIC JUDAISM: We are restoring what it was stolen, the translations, the true religion of the Rabbi Yeshua, its context cultural, idiomatic and theological.

10.CHRISTIANS: They believe that the new Covenant has been instituted.

NAZARENE MESSIANIC JUDAISM:  We affirm that still have not been given the New Covenant described in  Jeremiah 31:31-34  and named in Hebrews 8,  Yeshua brought renovation of the Covenant of Moses with different priestly laws.

Hebrews 8:8-13  “For finding fault with them, He says, “See, the days are coming,” says YHWH, “when I shall conclude with the house of Yisraʼĕl and with the house of Yehuḏah a renewed covenant,   not according to the covenant that I made with their fathers in the day when I took them by the hand to lead them out of the land of Mitsrayim, because they did not continue in My covenant, and I disregarded them,” says  YHWH. “Because this is the covenant that I shall make with the house of Yisraĕl after those days, says יהוה, giving My laws in their mind, and I shall write them on their hearts, and I shall be their Elohim, and they shall be My people. And they shall by no means teach each one his neighbor, and each one his brother, saying, ‘Know YHWH,ʼ because they all shall know Me, from the least of them to the greatest of them. Because I shall forgive their unrighteousness, and their sins and their lawlessnesses I shall no longer remember. By saying, ‘renewed,ʼ He has made the first old. Now, what becomes old and growing aged is near disappearing“.

None of this has happened, because the “New Covenant” is something that will happen when Yeshua returns to the world. In the meantime, we have the Nazarene Scriptures about the story of the true Messiah of Israel: Yeshua.
Thousand blessings and shalom to all.

¿Do you want to become an Ordained Messianic Rabbi?

Elohim is calling men and women as Messianic Ministers

27 thoughts on “10 Differences between Christianity and Nazarene Messianic Judaism” 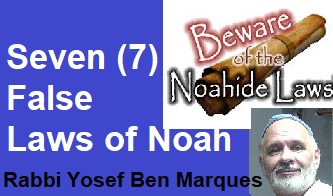