This page is the responsibility of Worldwide Ministry Elohei Kedem. based in Tampa, Florida, and in Caracas, Venezuela, being a Nazarene Messianic Jewish Ministry.

OUR VISION AND MISSION

OUR MISSION  In WMEK we are dedicated to help Christians who love Yeshua (Jesus) to return to the Hebrew roots of the original true faith  and the authority of Torah. We focus to provide ministers and congregations the knowledge of Nazarene Judaism practiced by the first Jewish believers of the time of Yeshua

NOTE: We do not preach to the Jewish People.

OUR VISION: We want to be a strengthened and recognized Nazarene  Jewish Ministry in them next 5 years through out the world teaching the true through articles, seminars, ordinations and the building of 50 Associated Nazarene Messianic Jewish Congregations.

Ruth 1:16 “your people will be my people, and your Elohim my Elohim.”

Revelation 14:12 “those who keep the commandments of Elohim (Torah) and the faith of Yeshua“.

If YHWH places it upon your heart to support this ministry financially... we will appreciate it.

The Jewish Nazarene Rabbi Yosef and Batya Ben Marques are  founders of   the Worldwide Ministry Elohei Kedem (USA). They are also the leaders of  Kehila Elohei Kedem Caracas, Venezuela, a Torah Observant  Congregation, of Jewish and converted in Yeshua, who worship the Elohim of Israel, Shabbat, Las Fiestas of the eternal, fulfilling all the commandments contained between exodus 12 to Deuteronomy 34 and the commandments of our Messiah Yeshua has Mashiach . 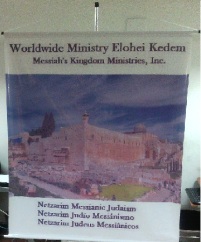 We are in love with Yeshua, the Messiah of Israel and the jewish roots of the faith, and had serve YHWH for 19 years:

1. We began serving in the Methodist Grace church, Kearny, New Jersey from 2000 to 2003 as Elders, in the areas of translation and theater.

2.We served also in the El Redentor Methodist Church, Elizabeth, New Jersey from 2003-2007 as Associate Pastors, in the areas of Torah Teachers, Directors of Theater, Evangelization and Missions and we were Vice Chairman of the Council of the Church..

3.After a revelation of the eternal in January 2010, Rabbi Ben Marques grasped its Hebrew roots and recognized the law of YHWH(Exodus 12 to Deuteronomy 34) as something that all Nazarene Messianic Jews must practice in their daily lives.

4. For 3 years we worked and helped in the Congregation Adonai Roi, in Caracas, under the supervision of Its rabbis in the areas of evangelization, organization of the Feasts of the Lord, travel, legalization of papers constituting the kehila, English courses for its members and support in the service of the altar and marriages,as elders and pastors recognized by our journey.

We stop participating in clergy functions at Adonai Roi in August 2013, and in February 2015 Elohim told us to leave the Congregation.

6.-Also are outstanding entrepreneurs in the areas of consulting and advisory services to companies and also recognized professionals in the area of translations. 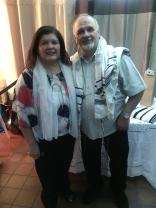 We both have a Bachellor degree in Theology and Pastoral Counciling respectivelly by the “Seminario Evangelico de Caracas” (2000). We were ordained as Evangelical Pastors in 1997 in California, and ordained as Rabbi in January 2016 by The Monastery Ministry.

Rabbies Yosef and Batya Ben Marques got the Title of Rabbi in 2016 and the Rabbinical Ordination in 2019. They finished Messianic Jewish Studies and Talmud in 2017. Also they have a solid background in Hebrew (2016 -2017 by Moreh Freddy Montiel, of Union Israelita de Venezuela, ULPAN) & Greek Studies in 2022. Torah Studies (2018) and Kabbalah Studies (2019-2022) and more than 25 years in active pastoral care.

See our curriculum in LinkedIn.com

OUR PAGES IN INTERNET ARE: 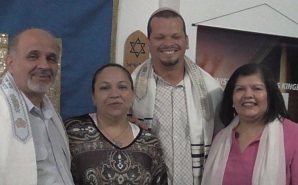 Deuteronomy 33:27: “Elohei Kedem (eternal Elohim) is its me’onah (purple), and underneath are the everlasting arms.“ He threw the enemy in front of you, and said: “!“Destroy!”

We appreciate your comments or suggestions. 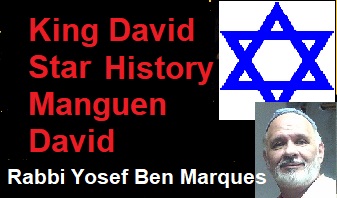