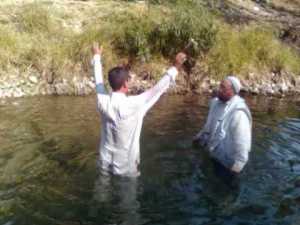 Clearly in the Nazarene Scriptures speaks that the “calling to Elohim” of all human being is product of the intervention of the Ruah (spirit) of Elohim through the grace of YHWH, but is not by the decision of the person involved. That process is call “conversion”.

Yohanan 6:44-45 ““No one is able to come to Me unless the Father who sent Me draws him. And I shall raise him up in the last day. It has been written in the prophets, ‘And they shall all be taught by YHWH.ʼ Everyone, then, who has heard from the Father, and learned, comes to Me”.
Romans 8:28-30 “ He also ordained beforehand to be conformed to the likeness of His Son, for Him to be the first-born among many brothers“.
Ephesians 2:8 “For by favour you have been saved, through belief (faith), and that not of yourselves, it is the gift of Elohim”

Once converted, every person needs to go through Tevilah/baptism so he or she:

1.Receive the Ruah of Elohim in his/her life  and 2.be pardon of his/her sins.

Yohanan the Baptist said in Luke 3:16 ““I indeed immerse you in water, but One mightier than I is coming, whose sandal straps I am not worthy to loosen. He shall immerse you in the Set-apart Spirit and fire”

WHY IS YESHUA THE MESSIAH OF ISRAEL TELLING US TO DO TEVILAH?

When we were in the world (egypt), we did all kinds of things that did not please our Elohim. Things that when we come into His son arms, we are not proud of.  We were living away from YHWH and His laws, we were living in sin. This is clearly seen in:

We needed a Savior, someone who clean our sins and restore our relationship with The Creator of The World. Someone who come and tumble down the wall of division between jews and believers in Yeshua, someone who make us part of Israel, the people of the covenant. That person is Yeshua, and Tevilah is the circunsicion of the heart. 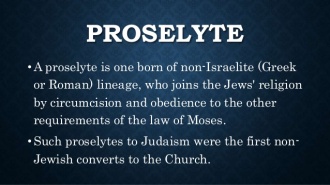 WHAT AND HOW DO WE HAVE TO DO TO BE PART OF THE COVENANT ?

We have to do the following 9 bases for Tevilah:

1.Baptized the disciples of Yeshua, the Mashiaj of Israel (Commandment)
Matthew 28:19 (Commandment) “Therefore, go and make taught ones of all the nations, immersing them in My Name, teaching them to guard all that I have commanded you (Yeshua through His ministry commanded them to follow all the mitvots of the Torah)”
Matthew 3:14-15 “ Yoḥanan was hindering Him, saying, “I need to be immersed by You, and You come to me? But Yeshua answering, said to him, “Permit it now, for thus it is fitting for us to fill all righteousness.” .

3. To not be damned.
Mark 16:16 “He who has believed and has been immersed, shall be saved, but he who has not believed shall be condemned”

4. Conversion come from the grace of Elohim.  Tevilah is an obligation.
Yohanan 3:5 “ unless one is born of water and the Spirit, he is unable to enter into the reign of Elohim.” .

5. To be pardon of the past transgretions.
Acts 2:38-39 “Repent, and let each one of you be immersed in the Name of Yeshua the Mashiaj for the forgiveness of sins. And you shall receive the gift of the Set-apart Ruah”
Acts 22:16 “Rise up, be immersed, and wash away your sins, calling on the Name of Yeshua”

6. As an example for others
Acts 9:17-18 (Rav Shaul three days later of conversion) “And immediately there fell from his eyes, as it were scales, and he received his sight. And rising up, he was immersed”
Acts 16:21-34 “Believe on the Master Yeshua the Messiah, and you shall be saved, you and your household”

7. To do it in the name of Yeshua
Acts 10:45-48 “And those of the circumcision who believed were astonished, as many as came with Kĕpha, because the gift of the Set-apart Ruah had been poured out on the gentiles also,… he commanded them to be immersed in the Name of יהושע (Yeshua) Messiah” .

8. To be sealed in circunsicion by the Ruah of Elohim.
Galatim 3:27 “For as many of you as were immersed into Messiah have put on Messiah.”
Ephesians 1:13 “in whom also, having believed, you were sealed with the Set-apart Spirit of promise,” 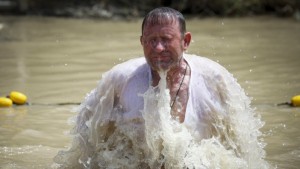 9. To be resurrected from our transgretions and our past life.
Colosians 2:11-12 “having been buried with Him in immersion, in which you also were raised with Him through the belief in the working of Elohim, who raised Him from the dead”
Romans 6:3-10 “We were therefore buried with Him through immersion into death, that as Mashiaj was raised from the dead by the esteem of the Father, so also we should walk in newness of life.. so that the body of sin might be rendered powerless, to serve sin no longer. ”
1 Corinthians 6:11 “But you were washed, but you were set apart, but you were declared right in the Name of the Master יהושע and by the Spirit of our Elohim” .

Hebrews 10:22 “let us draw near with a true heart in completeness of belief, having our hearts sprinkled from a wicked conscience and our bodies washed with clean water”.

NOTE: 1 Yohanan 5:6-8 “This is the One that came by water and blood: Yeshua the Mashiaj, not only by water, but by water and blood. And it is the Spirit who bears witness, because the Ruah is the Truth.  Because there are three who bear witness: the Ruah, and the water, and the blood. And the three are in agreement.
”

1 Peter 3:20-21 “in the days of Noaḥ, while the ark was being prepared, in which a few, that is, eight beings, were saved through water,  which figure now also saves us: immersion – not a putting away of the filth of the flesh, but the answer of a good conscience toward Elohim – through the resurrection of Yeshua the Mashiaj,
”

Remember Conversion, Justification and Tevilah are all different processes in  salvation, once you are circuncised in your heart you are a authentic nazarene jewish person as was stated in the Council of Jerusalem in Acts 15.